It’s still spring, but Freeform is looking back at a Cruel Summer with Tuesday’s two-hour premiere of the twisty psychological thriller.

The series takes a nostalgic time-hopping approach to its storytelling: Episode 1 is told from Jeanette’s point of view on June 21, 1993 (and ’94 and ’95), while Episode 2 flips to Kate’s POV on June 26 during the same three years. Now that we’ve established the show’s timelines, let’s recap in chronological order:

1993 | Jeanette (Tell Me Your Secrets‘ Chiara Aurelia) is an awkward, braces-sporting teen celebrating her birthday with her best friends Mallory (Supergirl‘s Harley Quinn Smith) and Vince (PEN15‘s Allius Barnes), who buy her a “You Go Girl!” necklace as a last-minute gift. Jeanette’s mom (Grey’s Anatomy‘s Sarah Drew) remarks that it looks cheap — but it proves to be very important. (More on that later.)

Jeanette spots her beautiful, popular schoolmate Kate (Cloak & Dagger‘s Olivia Holt) at a mall kiosk and awkwardly pretends to be shopping at the same stand. When Jeanette blurts out that it’s her birthday, Kate is surprisingly sweet and wishes her a happy birthday before making out with her hot boyfriend Jamie (Teen Wolf‘s Froy Gutierrez). Afterward, Jeanette, Mallory and Vince decide to cross off an item on their summer to-do list, which is more like a compilation of dares. So they break into a house that Jeanette’s dad (Lois & Clark‘s Michael Landes) just sold to the school’s new vice principal Martin Harris (Parks and Recreation‘s Blake Lee), who almost catches them in the act. The rush of breaking the rules seems to go to the good girl’s head.

In the second episode, we discover that in that same year, Kate is dealing with the revelation that her gotta-keep-up-appearances mother (Better Off Ted’s Andrea Anders) is having an affair. The information sends Kate into a drunken tailspin, which is how she ends up on the sidewalk in front of Martin’s house. 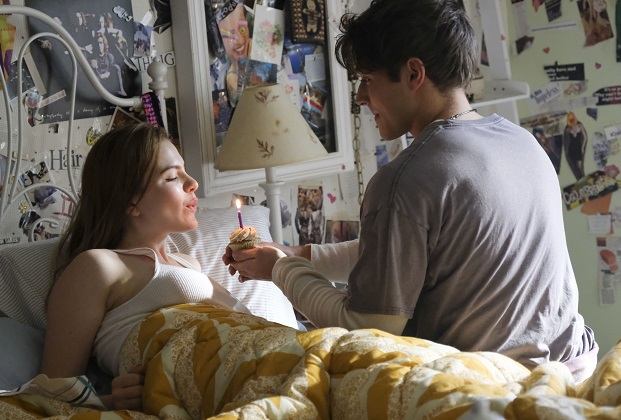 1994 | Jeanette — sans braces and now sporting shiny, straight hair — is awoken on her birthday by Jamie, who is now her boyfriend. Kate’s been missing for a while, and Jeanette has seemingly taken over the blonde’s life, becoming besties with Kate’s friends after growing apart from Mallory and Vince. But when Kate is miraculously rescued — Martin was holding her! — Jeanette’s new life begins to fall apart. In a shocking moment, Jamie hits Jeanette, thinking she had something to do with Kate’s disappearance. Then at the close of the first episode, we discover that Kate went on national TV to declare that Jeanette saw her when she was being held captive, but she did nothing to help her. “Jeanette Turner, I hope you rot in hell,” Kate says directly into the camera as Garbage’s “Stupid Girl” plays. It’s a “Gasp!” twist — but it might not be the truth?

In Episode 2, rumors are circulating around town about Jeanette, but Kate hasn’t gone on TV with her accusation just yet. (I think. #timejumpproblems) Jeanette tells Jamie — who’s back with Kate — that she did not see the other girl and suggests that maybe Kate’s trauma is responsible for the misunderstanding. Kate spies on the secret meeting and the pair’s kiss. When Kate finally talks to the police, she pulls out Jeanette’s “You Go Girl!” necklace to prove that Jeanette was really there. Hmmm… The police then ask how well she knew Martin before the abduction. “Not well at all,” she replies/lies. 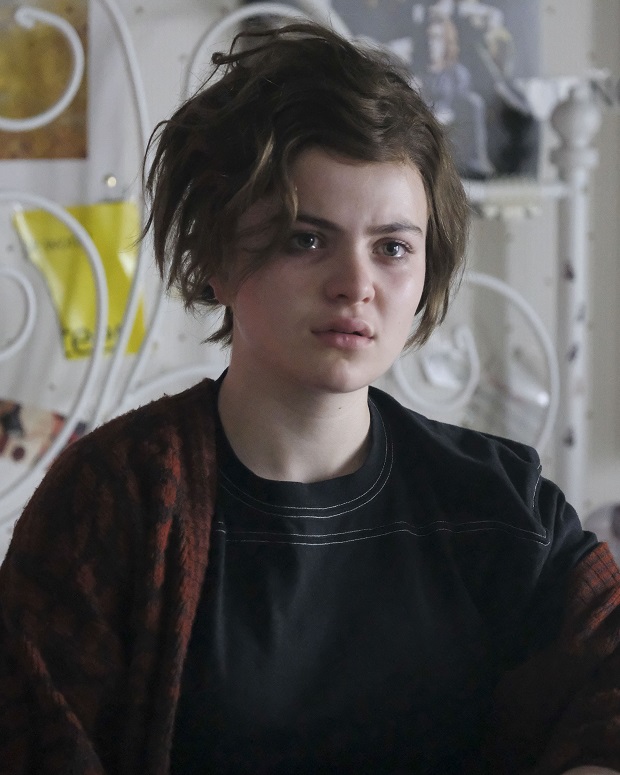 1995 | Jeanette is now the most hated person in the country, and she’s got the angry, shaggy haircut to go with it. She obsessively rewatches VHS news footage about Kate’s disappearance, while Jamie sits in his car outside her home like a creep. Her father — whose happy marriage seems to have fallen apart over the past two years — wonders if his daughter is a sociopath, and Jeanette’s lawyer advises her to be more likable.

Meanwhile, Kate is now all about grunge-y plaid and piercings and The Cranberries’ “Zombie” and has shed her filter. She logs onto an abduction victim chatroom to ask what would happen if people knew she wasn’t being entirely honest. That question might be answered because Jeanette is suing Kate. As Kate watches the announcement on the news, the episode flashes back to her in a beautiful red dress, banging on Martin’s basement door and pleading for him to open it. In 1995, Kate erupts into a primal scream.

What did you think of Cruel Summer? Grade it via the poll below, then hit the comments!

Fed decision, retail sales: What to know this week

G7 leaders share a bold vision for a net zero future. But the devil is in the lack of detail